Last Wednesday, July 14, the General Court of the European Union annulled an earlier decision of the European Union Intellectual Property Office (“EUIPO”) and its First Board of Appeal of  EUIPO of June 2, 2020 (Case R 2292/2019-1), which refused the registration of the three-dimensional shape of the lipstick case of the French trademark Guerlain as an European trademark on the grounds that the three-dimensional packaging design did not have the distinctive character necessary to serve as a mark under Article 7, paragraph 1(b) of Regulation (EU) 2017/1001, considering that the usual lipsticks on the market were not significantly different, as, according to EUIPO, they were all cylindrical in shape and consumers were used to oval-shaped packaging. Furthermore, the First Board of Appeal considered that, even assuming that the mark applied for was different from all other shapes of lipsticks on the market, it was common to find multiple shapes and that the specific characteristics of the mark did not allow it to be significantly distinguished from the other shapes commonly found on the market, so that it would be perceived as a variant of them. 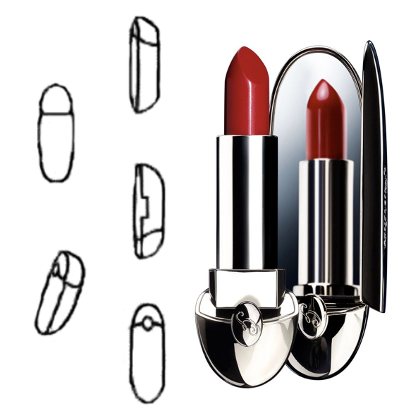 In its judgment, the General Court of the EU considers that the mark represented in Guerlain’s application does in fact have distinctive character “because it departs significantly from the norm and customs of the lipstick sector”, and specifically focused on two points to support its decision:

First, the court held that “the assessment of the distinctive character of an EU trademark is not based on the originality or lack of use of the mark in the field of the goods and services concerned”, and furthermore, “the mere novelty of [a] shape is not sufficient to conclude that there is distinctive character”. At the same time, the court stated that “a three-dimensional mark constructed by the shape of the product for which registration is sought must necessarily depart significantly from the norm or custom of the sector concerned in order to have distinctive character, so that the mere novelty of such shape is not sufficient to conclude that there is such character, since the decisive criterion is the capacity of such shape to fulfill the function of indicating commercial origin.”

Second, the court stated that the fact that they have a high-quality design does not, in and of itself, mean that the three-dimensional shape of those products is distinguishable from the products of others in the market. Although the court stated that it is appropriate to take into account “the aesthetic aspect of a mark“, such consideration does not amount to an assessment of the “attractiveness of the product in question” and, instead, is made in order to determine whether the product is capable of generating “an objective and uncommon visual effect in the eyes of the relevant public”, and, therefore, of differentiating it from other products on the market.

As a result of its earlier groundings, the General Court found that Guerlain’s lipstick shape is “uncommon for a lipstick and differs from any other shape existing on the market,” allowing the court to declare that the mark has distinctive character and can be registered with the EUIPO for use on “lipstick” products.

Eleonora Rosati, professor of intellectual property law and director of the Institute for Intellectual Property and Market Law at Stockholm University, says the General Court’s decision “represents a sensible outcome and brings some refreshing news to trademark applicants who want to register marks in a conventional or less conventional way.” It is also a particularly welcome development for the fashion industry, he says, as “in the last 2-3 years, on their own, things have been pretty bleak for trademark applications relating to such signs.” For example, he notes that the Court of Justice of the European Union “held that Birkenstock’s surface pattern mark lacks distinctive character (C-26/17 P); LVMH has still not been able to get its Damier Azur pattern registered (although things may now improve; T-105/19); Moon Boots’ shape may be copyrightable (in Italy), but has so far been unsuccessful on the trademark registration front (1093/2019-1); and Buffalo Boots’ position mark has not yet been found registrable (2167/2019-1).”

The companies of the industry will be able...