Will the approval of the Law on Waste and Contaminated Soils impact textile industry?

“(…) only half of the clothes are reused and recycled in Europe, and only 1% of them are recycled in Spain”

“In the next few years, we will see how local waste management, which has a high potential for improvement, will be amended: Spanish city councils that have not already done, will incorporate new formulas for separate collection, for example, for bio-waste and textiles, among others”

With the approval of the Draft Bill on Waste and Contaminated Soil, companies in the fashion industry will be prohibited from destroying any surplus that they do not sell, without having to pay a tax for the time being.

The aim is to promote more sustainable and less polluting alternatives for textile production, since, according to the UN, fashion is the second most polluting industry after the oil industry. Hence, for years, a movement that was born within the industry is trying to reverse this trend by promoting the use of environmentally friendly production methods and integrating product life cycle analysis in their competitiveness strategies.

“In this new paradigm, circular economy and innovation go hand in hand to advance sustainability, also within the range of natural fibers, including those grown and produced in our territory, which is allowing us to work with plant debris such as borage, pineapple leaves, etc., enabling fibers such as lyocell to become a reality in our home”

In early June 2020, the Spanish Circular Economy Strategy 2030 was approved, which lays the basis for promoting a new economic model of production and consumption aligned with the circular economy strategy of the European Union, and highlights the textile and apparel sector as a priority sector of activity in which to incorporate this challenge.

Through the implementation of waste prevention policies, it is proposed to break the relationship between economic growth and the impact on the environment associated with the generation of waste. This is one of the regulatory proposals included in the Draft Bill, compared to the previous law. To this end, a series of quantifiable objectives are established, set out in a timetable that foresees: (i) to reduce up to 13% the weight of waste generated in 2025 with respect the generated in 2020, and (ii) up to 15% in 2030.

The reuse of products through donations and the implementation of systems that promote repair and reuse activities, particularly, among others, in textiles, will be encouraged as prevention measures to avoid the generation of waste (Article 18 d) of the Draft Bill).

Although, as we have already mentioned, the destruction of surplus (non-sold) textile products is also prohibited, which shall be for donation and, where appropriate, for reuse (Article 18.2 of the Draft Bill). 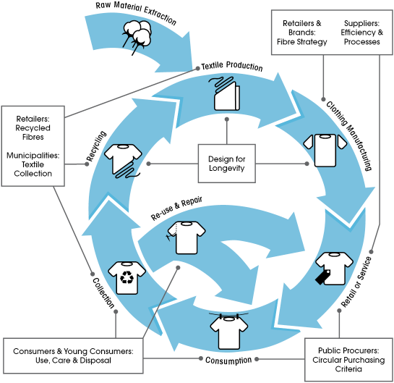 In addition, the Draft Bill includes the obligation for the authorities to adopt the necessary measures to ensure this reuse, through the separate collection of textile products before 31 December 2024. The objectives set are as follows (Article 26 of the Draft Bill):

It is finally foreseen that an extended producer responsibility regime for textile products will be developed by regulation within 3 years from the effective date of the Law on Waste and Contaminated Soils (Sixth Final Provision of the Draft Bill).

Therefore, the Draft Bill aims to establish a system of responsibility for both producers and Spanish families that will allow a considerable reduction in the generation of textile waste, through the promotion of reuse and the separation of waste by type of products.

As far as we are concerned, we believe that we should not only focus on the collection and reuse of textile products but also on the promotion of sustainable fashion manufacturing, i.e., to promote the implementation of environmentally friendly production measures (and not only respectful consumption). What do you think?

In any case, it should be borne in mind that, at this moment, the Draft Bill has been sent to the Council of State, and once the latter issues its opinion and proceeds to its approval as a Draft Bill, it may subsequently be approved by the Parliament.